Arriving in Zhongye, I’ve quickly realised this is another of those anonymous dusty industrial sprawls that China specialises in so well. A quick manouvre onto a rickety minibus that reassuringly looks like it’s been worked over with a cricket bat and I’m on my way south to the mountains.

Ten minutes into the journey, we pull up behind an empty bus and everyone is ordered off and told to go into the next bus. At least that’s what I presume was said. Lots of shouting and arm waving, I just shrug my shoulders and follow the herd. Trying to work out logic in daily life here is a bad move, madness lives down that path. 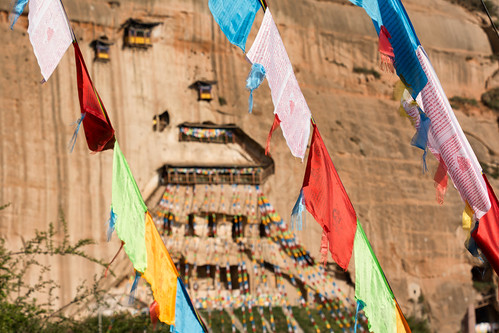 Mati Si was worth every effort to reach however. Tucked up on the edge of some very large mountains that form a first barrier to the Tibetan Plateau to the south sits a lush valley with an array of ancient Bhuddist temples carved into the sandstone cliffs starting from over 1,600 years ago with many of the temples accessible only by climbing hidden staircases and vertical shafts in the cliffs. 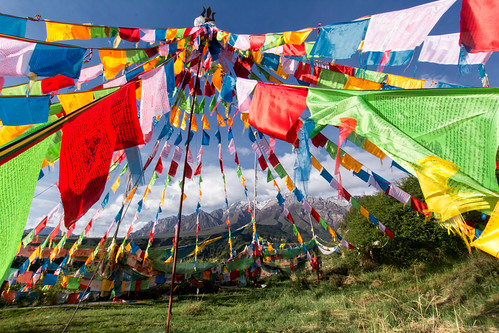 The people are descended from a mix of Tibetan and Mongol herders, you immediately feel that surrounded by Tibetan prayer flags and stupas on the hills. It’s a blissful world away from the melee of the city to the north. People are relaxed, friendly and seem to have all the time in the world. Life moves at a very  leisurely pace up here. And the air is clean and the sky blue – you learn not to take that for granted in China, especially further east where a brown soup sits over much of the country for weeks on end. 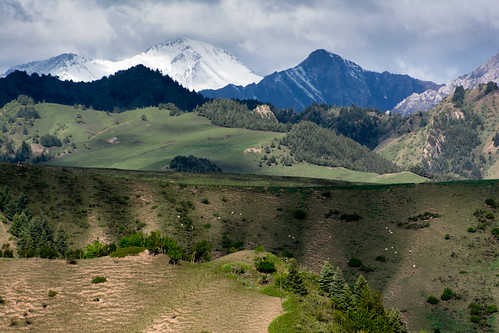 I’ve spent the day climbing around inside the caves and up on to the ridge above for some amazing views across the valley and up into the mountains. In the evening I go for a walk up into the meadows and sit for a while with a local herder who seems intent on holding a long conversation with me despite it being fairly obvious that I can barely form a word in Chinese. I suspect that even if I had a good grasp of Beijing mandarin, I still wouldn’t have a clue what this guy was saying, a bit like learning basic Queen’s English then visiting Falkirk and attempting to engage with a drunk scheemy. It’s ok though, it fits in with the vibe of this place. 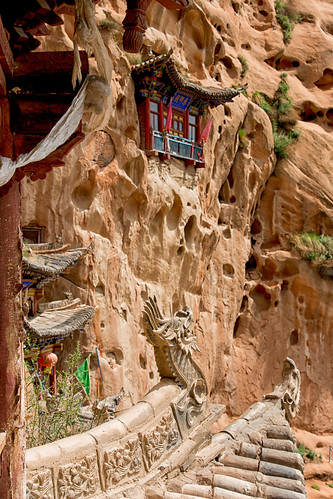 In the morning I go for more hikes across the tops with more friendly locals and visit the 1,000 Bhudda caves further down the valley where a man oddly attempts to flog me plumbing fixtures. Just what I needed.