I last took the train from Beijing to Ulan Baatar in 1992 shortly after the Soviet Union dissolved and after Russia had pulled support from Mongolia. Mongolia was closed to foreigners at the time and the only way in was by personal invitation from a local. On my way into China I’d met some dodgy Russians in Hong Kong who were running a black market operation out of a hotel in Beijing where visas could be “arranged”. Entrusting my passport to some seedy mafia outfit, it surprisingly returned a few days later with all the paperwork needed and I was off.

At about that time the Russian rouble had previously been tied to the US dollar on a one to one rate, the new government had removed this fix and it had promptly settled at 120 to 1. The Mongolian Tougrik had taken a similar nosedive and official bank rates were having trouble keeping up. Changing money on the street was a prisonable offence but people on the train were keen to change at a rate almost 15 times higher than the bank rate. I changed $20 thinking it’d be enough to start with, received bricks of notes and was giving it away by the time I left a week later. 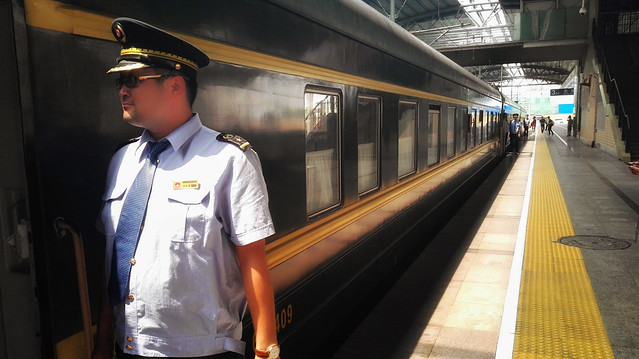 24 years, things are a bit more official … there’s a government kiosk in a Beijing suburb to get the visa, prices are high compared with most Asian destinations and there’s no longer any black market. The Russians will have long moved on to some other dodgy enterprise by now.

Getting into Beijing train station is an adventure involving a 25 gate wide rugby scrum, pushing, jostling and shouting its way through multiple security screening layers.

Luckily I’d arrived with plenty of time on my hands, or so I thought. No sign of my train on the departure board. Turns out the time on the ticket next to the date of departure is the time of ticket purchase and the actual time of departure is that obscure four numbers near the bottom. Obvious really. Equally obvious is that you can’t buy or amend the ticket at the train station but instead have to go to a hotel a few blocks away. Fortunately I just need to pay a small admin fee and I’m on my way the next day, escaping China with 3 minutes left on my visa … 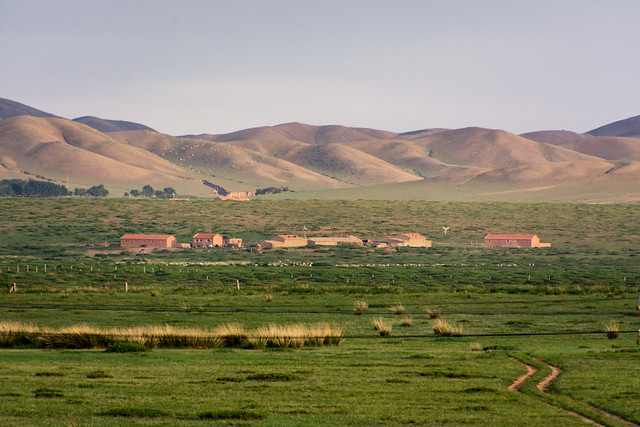 The train to Ulan Baatar is not the most exciting ride, particularly as the most scenic part through the Gobi sand dunes happen at night now. There’s a scenic mountainous area north of Beijing, then you’re into the dusty northern semi desert plains all the way to the border.

The current schedule lands you at the border at around midnight where you have to get off for 90 minutes while they change the carriages from Chinese width bogeys to Russian ones. After both sets of border formalities, it’s near 2am by the time I get settled into my shelf sized bed. It’s 31 degrees in the carriage, there’s no cooling other than an open window supplying a steady miasma of diesel fumes from the engine up front. Pleasant.

Morning finds the train rattling through stony semi desert with glimpses of goat herders and the remains of the once great ibex herds that once roamed here. By late morning we’re chugging up the first of the grassland hills before arrival in Ulan Baatar some 20 hours after leaving.

Mongolia is not a country that lends itself to exploring by public transport. Ancient buses bounce you along unforgiving roads to take you from one town to another, bypassing all the wilderness and national parks that make Mongolia so incredible. Even with your own wheels, in a country where the main route is nothing more than several sets of intertwining tyre tracks across the vast landscape with no road signs, unless you’re self-contained with camping gear, a GPS and a set of coordinates then you’ll be spending a long time lost in the wilderness (not necessarily a bad thing). 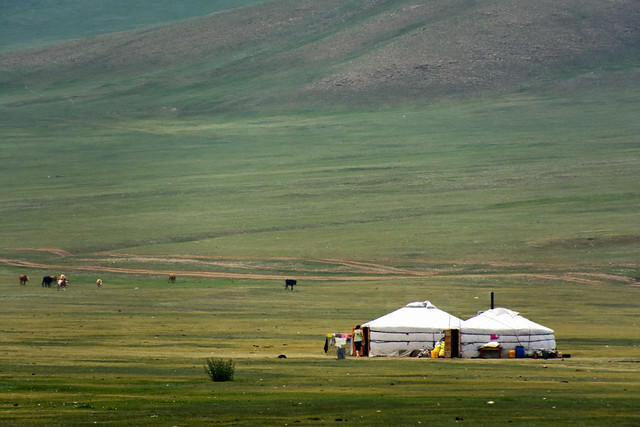 One of the few places where taking a tour is the better option, I sign up to a set of connecting van tours to take me through central, northern and western Mongolia over the next 6 weeks. The tours are rough and ready, camping and staying with nomads along the way with a leisurely schedule. It’s a good compromise. 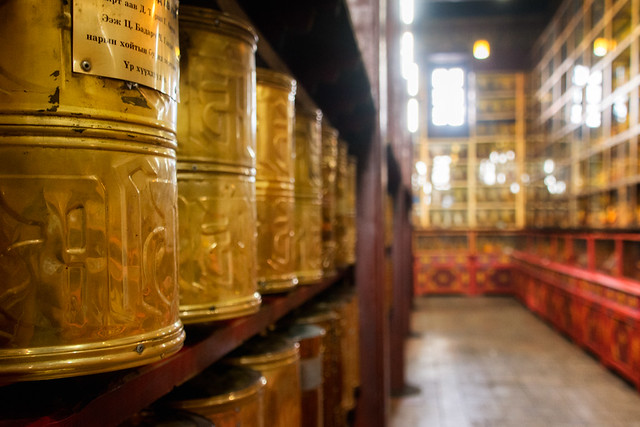 I’ve a day to kill before heading out, enough time to catch the morning prayers at Gandan Khiid Monastery, Mongolia’s largest and most important monastery. It’s an oasis of peace from the city outside with a large area covered in temples ancient and new. In the oldest temple, monks are reciting sutras, the inside dark except for shafts of morning sun lighting up the clouds of incense. It’s a great place to hang around in a dark corner and soak up the atmosphere …

An afternoon of replacing worn out gear and sampling the street food, I’m ready to start my Mongolian adventures …

One thought on “Mongolia 01 – Into Mongolia”