During the Soviet era, Stalin had the mongolian communist government destroy almost all the monasteries, the only survivors were the ones that managed to convert to museums. Some 30,000 monks were massacared, and at this spot alone, 100 were thrown to their deaths off the cliff top.

Sunrise colours started a couple of hours ahead of the actual sunrise across the plains, the horizon lighting up purples and yellows over the distant mountains.

When the brilliant yellow light hits the land finally, filling it with impossibly long shadows, the wandering animals begin to stir and the first movements of the locals emerging from their gers gets the day started. Life moves slowly at the start of the day here, then progresses at a similar speed for the rest of the day. Come to think of it, the end of the day is fairly sedate too.

I go for a walk getting some photos of the herders getting the animals out to pasture and wander out on to the dunes to watch the shapes shift in the sand and the day slowly get started out on the plains.

A couple of hours drive through more wild scenery, alternating between wide open valleys, rolling hills and money mountains. Always the ubiquitous herds of horses, sheep and goats and the white gers break up the otherwise endless green expanse. 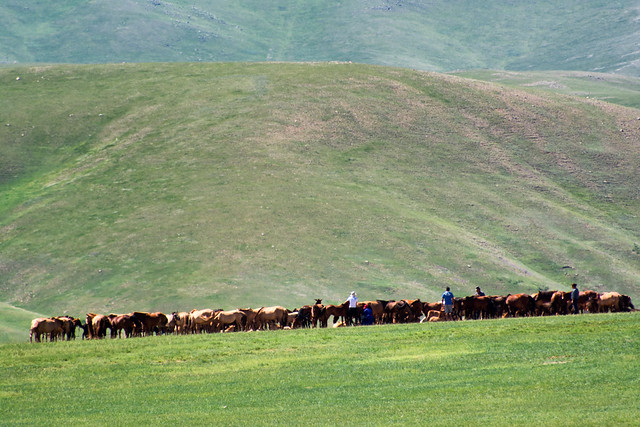 At the end of this is the small town of Khurjit, a mix of permanent gers, Siberian-style wooden houses with brightly painted roofs, and the occasional Soviet era building thrown in to the mix. This is as big as towns tend to get outside of the capital which act as a centre for supplies and services for the thousands of nomadic families that live in the region.

Khurjit also marks the end of the sealed road which is where things get a bit more lively. Rather than having a single road to follow, the road splits into several meandering threads which criss-cross and down which several cars vie with each other for pole position as they bounce and slide along the muddy tracks. The vehicles are everything from large 4×4’s to small Toyota hatchbacks and Soviet era vans. I start to feel a bit like I’m in an episode of a Mongolian version of Wacky Races.

Along the way we come to a cliff with a dark history. Before the second world war there were thousands of Buddhist monasteries in Mongolia. During the Soviet era, Stalin ordered  the Mongolian communist government to destroy almost all the monasteries, the only survivors were the ones that managed to convert to museums. Some 30,000 monks were massacred, and at this spot alone, 100 were thrown to their deaths off the cliff top. For such a serene place of beauty, and with modern Mongolians seemingly being such gentle and spiritual people, it’s hard to imagine such a thing happening here.

What seems like hours of butt pounding road adventures brings me to the head of Orkhon Khürkhree, a beautiful remote valley flanked by Siberian looking spruce forests and filled with a wild river tumbling it’s way towards Lake Baikal in Russia to the north. My family greet me with a bowl of fermented horse milk and dried yak yoghurt, much better than it sounds. A walk along the river is quickly abandoned as lightning strikes the nearby hillside and the skies open.

Late evening brings a clear in the weather, enough time to try my hand at yak milking (definitely not as easy as it sounds) and a walk out across the ancient lava fields that fill the valley to watch rainbows and sunset colours.