The Orkhon Khürkhree valley woke filled with swirling mist, slowly pierced and broken by the morning sun. This morning’s early start for the horse trek ended up being 11.30. You have to adjust to Mongolian time, things happen when they happen. A walk along the nearby canyon fills the time in before getting started. 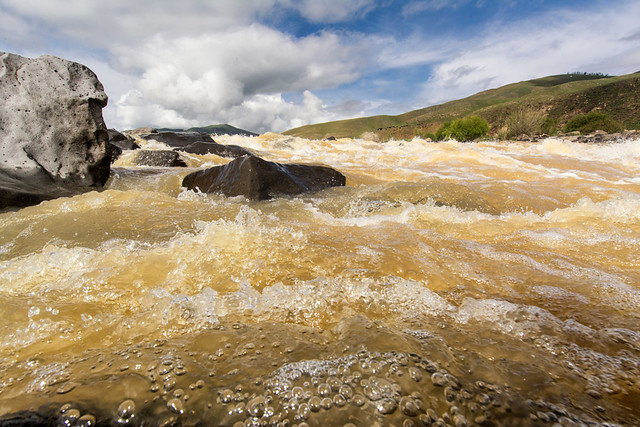 Mongolian saddles are small and hard, they require a different technique to Western riding style. I’m not complaining, it was still more comfortable than yesterday’s van ride. I get my steed for the day, a short stocky mare with a bit of feist. The handlers are a bit worried that it might be too feisty for me, but for the first hour or so it’s more of a battle of wills to get it to do more than plod and go her own direction. I think she must have eventually warmed to me, we’re soon cantering and galloping across the valley, going in the direction I wanted whenever that was also the direction my horse wanted.

Mongolian horses could be said to have a vague homicidal nature about them. Never approach them from the rear, never approach them from the right for some reason, never stare them in the eye and on no accounts play poker with them over distilled fermented yak’s milk. They’re said to keep you on your toes, mostly as they start galloping and, in a effort at preserving the possibility of continuing your lineage, you raise your nether-regions off the rock-hard saddle. 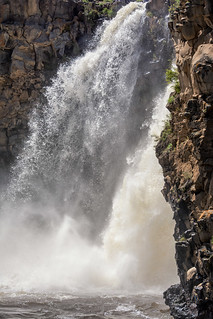 The goal was to reach the nearby waterfalls, the largest in Mongolia. Not huge by any normal standard but still impressive. Also very popular with Mongolians apparently as well. The water, fortunately full from recent summer rains (it only flows for a few weeks each year) plummets off the edge of a lava flow into a chasm below. Safety standards here are a little more relaxed as people either jump to the small island above the falls with their kids in tow, and clamber down the sheer cliff single handed (the other hand carrying children too small to walk). I see parents waving their small children over the waterfall, considered good luck seemingly – presumably for those that are successfully retrieved to relative safety.

Everywhere you look, the scenery is dramatic here. Mini canyons and craggy pine clad peaks, mist rising through the forests as the afternoon thunderheads build. Heavy rain knocks the afternoon’s ride on the head but clears late evening to allow a hike out in the long twilight.

I come across something surprising here. The lava flows I’d seen along the valley so far could be thousands or more years old, but across the valley I find relatively fresh lava (no more than a few hundred years old I would guess), new enough that no soil and almost no vegetation had yet developed. And seemingly it had erupted from fissures rather than volcanoes. I guess I’m readjusting my understanding of Mongolia again.

The sun breaks through to light up the low mist at the head of the valley. As I turn to head back, I spy a pika scurrying about the lava blocks, most likely happy to use these as protection against the falcons that frequently pass overhead. Pikas look a lot like a hamster with large inverted ears. They’re actually the smallest member of the same order that includes rabbits, smaller than the palm of your hand. Possible contender for cutest small animal also looking like the progeny of a Pikachu & a hamster.

Being immensely timid creatures (understandable when you see the size of the vultures circling overhead), you need to remain stock-still and completely silent for a good 10 minutes or more. They were thought to be extinct in China, but it turned out that it was just that nobody had managed to stay quiet for that period of time.

Darkness is at hand, as I hike back across the old lava flows, a brief sunset display flicks its way across the valley, the only sounds are the distant roar of the river, the braying of animals and the laughter of the family’s kids as they play football and chase goats. Mongolia life.