Rain has arrived and turned the road out into a set of twisted mud snakes winding across the valley floor. It seems we’re often just following the vague imprints of tyres where someone once drove before, or creating our very own new road. Cars designed for Japanese cities are slithering about and getting stuck trying to cross new streams that didn’t exist the day before. The rivers are swollen and crossing the main one brings the water almost up to the windscreen. Our driver does a great job and eventually gets us out back into semi-sealed roads by mid-afternoon on a journey that should have only taken a couple of hours. 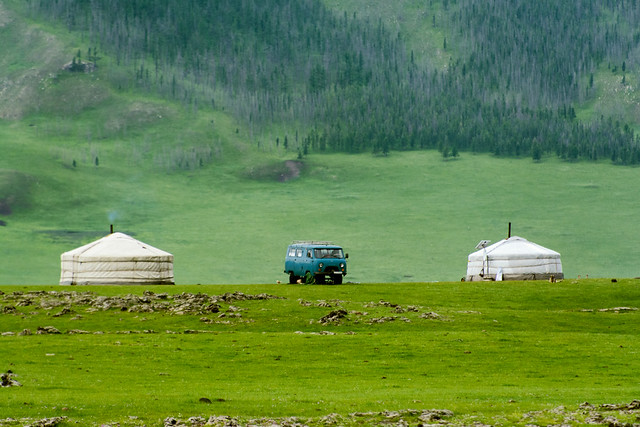 We had intended to reach Tövkhön Khiid, a remote mountain top monastery, but considering the road there was even worse than what we had just got through, and that the van was only two wheel drive, it was consigned to the nice-idea-for-another-time bin.

Instead we reach Erdene Zuu monastery near to the ancient capital of Kharkhorin (Karakorum). Built in the 1500’s, it was the first monastery in Mongolia and housed at its peak over 100 temples and over 1000 monks until the Stalinist purges of the 1930’s when most of the temples were destroyed and the monks either shot or sent to Siberian gulags. The impressive walls surrounding the complex are still intact forming a huge rectangle of interlinked stupas. 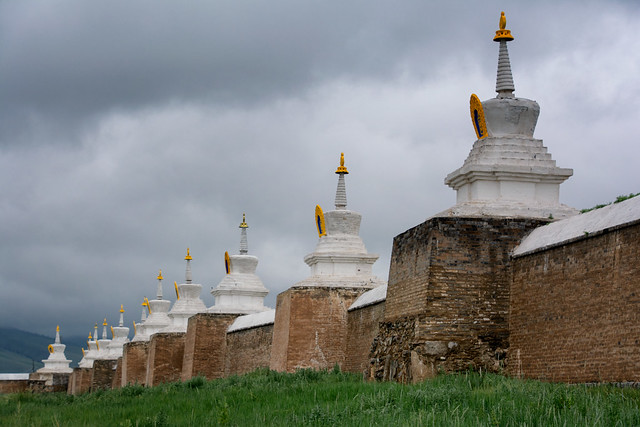 Most of the few remaining temples are now museums housing relics that survived the purges by being hidden for over 50 years by locals until the end of communism when the monastery was allowed to reopen. The 4th Dalai Lama was born here in the 1570’s and one temple is dedicated to him, another Tibetan style temple is now practising again. Inside, an 8 year old monk plays with a paper aeroplane before heading out to jump in the puddles and chase birds. Normal 8 year old boy then. 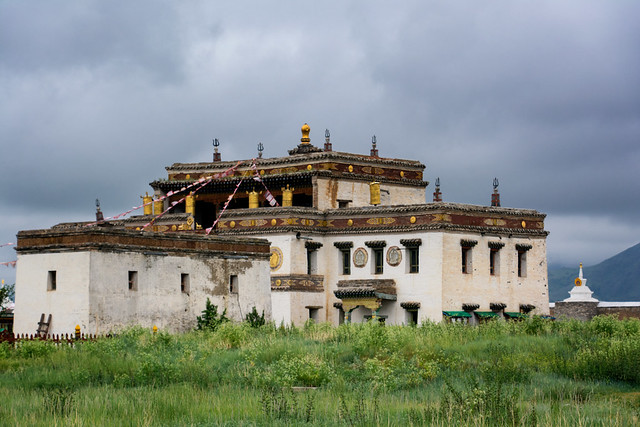 It’s a seemingly meagre remains for the capital of the largest empire the world has ever known, stretching from Eastern Europe and the Middle East all the way to the Pacific, from the Siberian tundra to southern India. Ground surveys have revealed a vast area of foundations stretching out beneath the steppes from here but virtually nothing to date has been excavated.

Despite being mid-summer, the temperature has plummeted, the rain continues thick and heavy, so much that there is almost like a midday twilight going on. We decide to abandon ship before one becomes necessary and head west to the promise of hot springs and volcanoes.