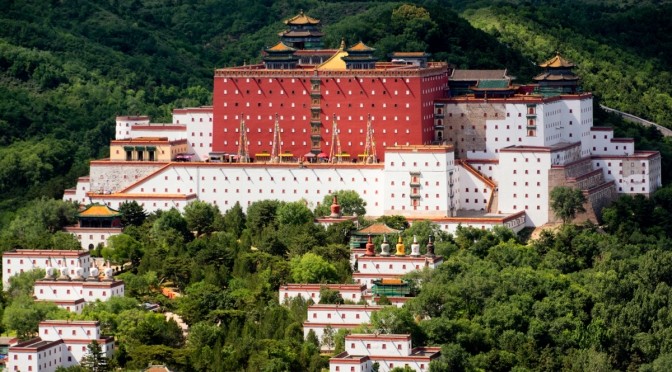 North of the Great Wall sits Chengde, favoured summer retreat for the emperors of the Qing Dynasty escaping from the Beijing heat. The Qings, being Manchus, weren’t too worried about being north of the wall at this stage since that fateful afternoon while sitting about munching dried yak cheese in frigid tents on the plains of the frozen north, they’d noticed a lot of chaos and a particularly large power vacuum and figured they’d head south for a taste of the high life*. They’d gone on to invade and conquer the whole of China and weren’t too worried about anyone behind them.

* May not be an entirely factual account of what actually happened

In those days it was a remote forested area teeming with wildlife suitable for hunting (which in China could mean pretty much anything that moves). 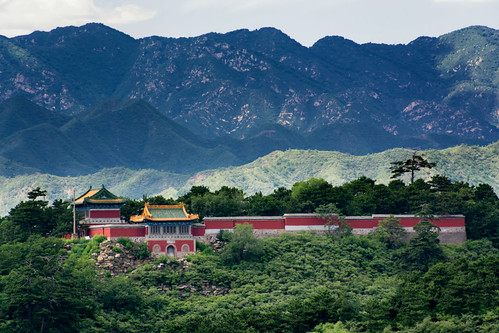 The imperial palace sits inside of a 10 kilometre wall encompassing lakes, parklands and spreading out over wooded hills. Walking in to the park I’m having to plough through milling crowds and scores of loudhailed tour groups which isn’t boding well for the experience ahead, but they seem to only be hitting the buildings near the entrance. The more community minded of these have thoughtfully brought along their portable speakers with the volume turned up to 11, playing some traditional music that, to my unaccustomed ears, sounds a little like the noise a cat makes sliding down the glass roof of a conservatory using its claws for brakes and realising it’s all about to go horribly wrong.

As I press on past to places requiring a little effort to get to the crowds thin to bearable levels. The lakes are dotted with ornate bridges, pagodas, temples and other royal buildings and make for a great couple of hours strolling. 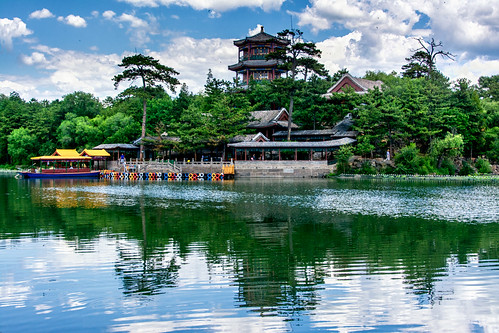 Beyond is sprawling area of scattered temples and forested hills. Hiking up to the top of the hills at the back of the park gives outstanding views of the Puning and Putuozongcheng temples, the latter a replica of the Potala Palace in Lhasa. 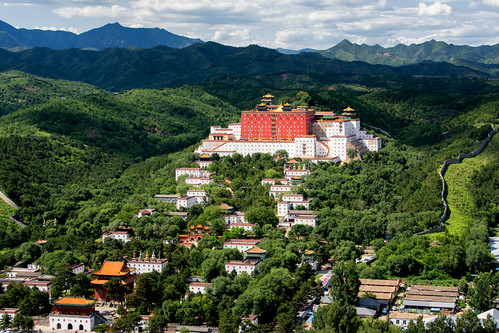 This is one of the residences of the Panchen Lama, highest ranking lama after the Dalai Lama. The 10th Panchen Lama mysteriously died suddenly after criticising the Chinese government’s treatment of Tibetans. His Tibetan nominated successor also mysteriously disappeared shortly after being named and was replaced by a government nominated one instead, which the Tibetans refuse to recognise with arguments from one side saying the Tibetan successor is being held captive, the other saying he’s living a normal life. One of the Panchen Lama’s responsibilities is in naming the successor to the Dali Lama when he dies … expect lots of controversy when that happens. 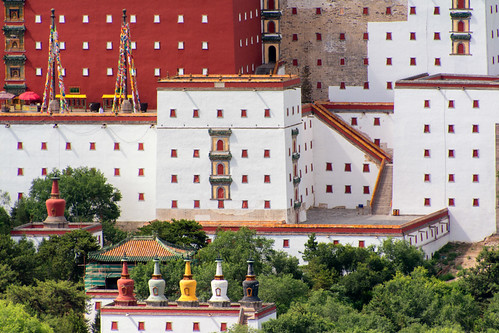 Controversies aside, the temples are outstanding inside and out. The buildings are, rather than their appearance of huge solid blocks from the outside, actually multilevel courtyards with a huge temple in the middle. Escaping down long corridors leads me down creaky floorboards, past ancient murals depicting scenes from the sutras, ancient carvings and through a general miasma that reeks of history – it could also have passed for musty socks but the monks all seem to be in sandals. 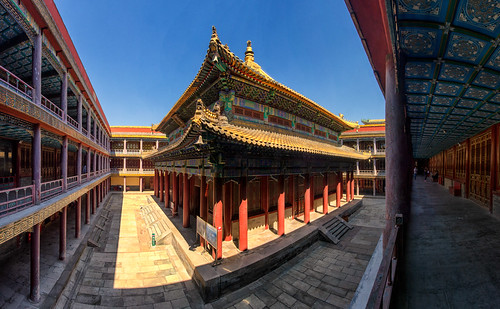 Wandering done, I have the great idea of catching a bus out to the coast to the place where the Great Wall meets the coast. I’ve been to the western extremity where it meets the Takloman deserts in Gansu, hiked a decent section in the hills to the south, this seems like a good way to complete the experience. I’ve had better ideas. The walled town that formed the first gateway through the wall has been turned into a tourist circus with your senses and eardrums assaulted from all sides, and the circus was in town en masse for the weekend.

Trying to find some peace walking down an alley barely wide enough to fit a car down, sure enough, a car hares up behind me and starts blasting his horn at me … as if I’m able to melt into the wall to let him past. I need some distraction from the melee so I stop and cup my hand as if I can’t hear what he’s saying. More horn blasting ensues, along with more hand cupping and gestures to say I don’t know what he’s trying to say to me. He’s going livid by the time I turn around and gently saunter on ahead with the speed of a herd of turtles. The alley widens and he zooms past only to park another 20 metres ahead. Time for more fun, I stop next to his door before he gets out, pull out the phone and pretend to be busy doing whatever it is that people spend so much time doing on their phones. The horn blasting, ear cupping cycle starts all over. I can see he’s gone a shade of purple at this point, time to make an exit through the market before he has an coronary.

Where the wall meets the sea, a tsunami of tourists has already washed ashore and it’s a struggle to make it out onto the ramparts, which look suspiciously like they were built last week. To be fair (in what has to go down in history as one of the greatest barfights of all time), 110 years earlier, occupying French and Japanese troops starting drinking, things got out of hand, fights broke out and in the morning they all woke to hangovers from hell and noticed that they’d managed to blow apart a significant chunk of the eastern end of the Great Wall*.

* May also not be an entirely accurate rendition of events, but not far from it apparently

Sandwiched up against this most historic of sites is an industrial shipyard and docks … I was greeted with a view very reminiscent of what I saw from the western end … so some sort of completion then.

I managed to last half a day here before retreating to the comparative peace of Beijing and get on the train north to Mongolia. Not before visiting this excellent landmark however … 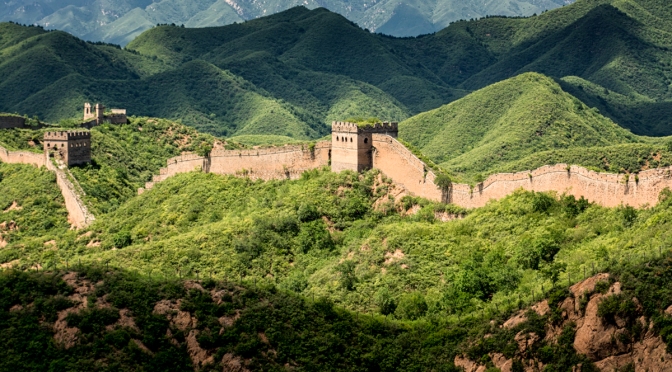 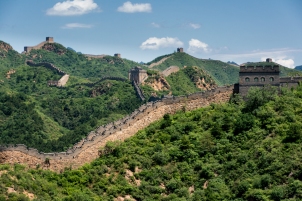 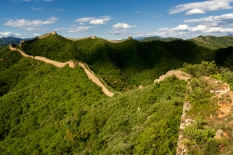 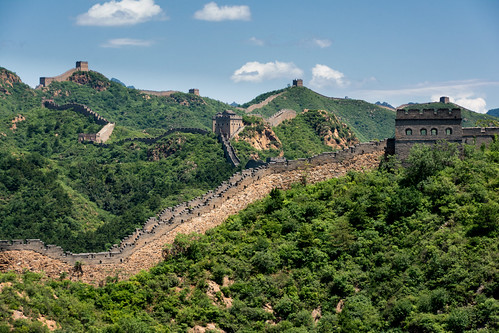 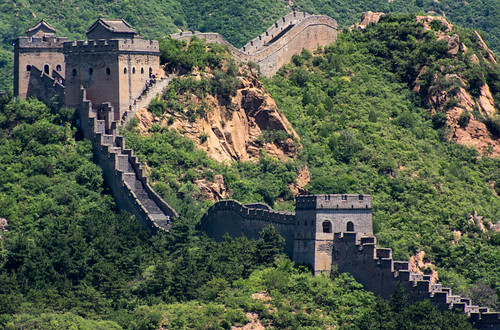 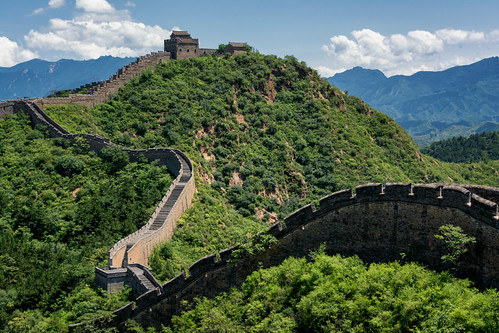 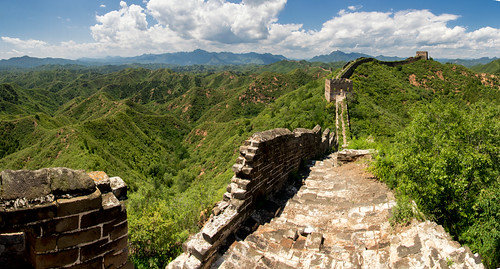 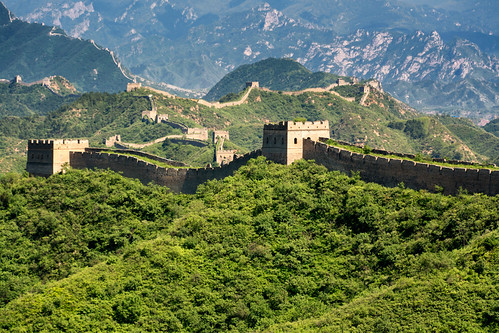 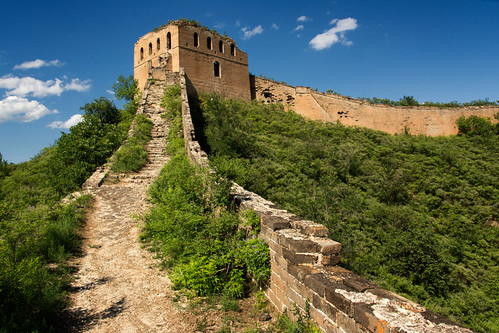 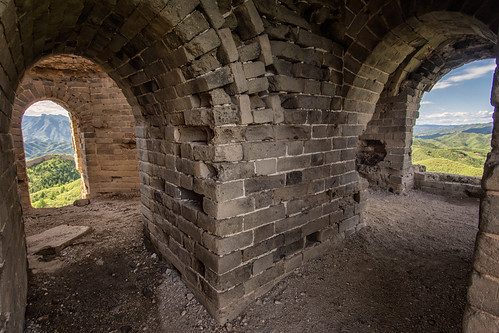 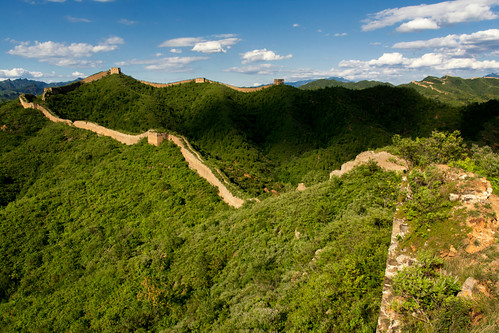 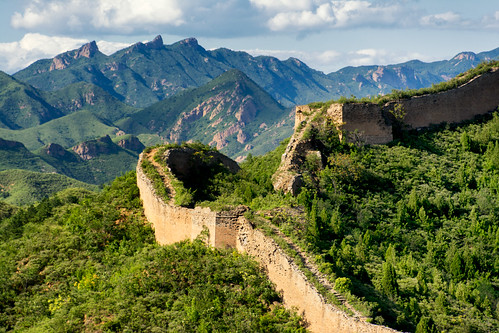 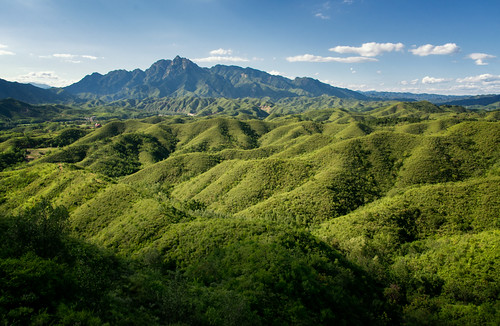