The days of summer seem to have fled for now, Karakorum is an enveloped in thick cloud and horizontal rain with the temperature struggling to nudge double figures.

With the rivers in flood and anything off tarmac resembling a mud bowl, we abandon our mission to reach Tsenkher hot springs out in the mountains. Instead, we make a short stop at the regional centre of Tsetserleg where I make the climb to the shrine above Zayin Huree monastery. Visibility in the rain isn’t fantastic but it’s a nice view all the same and a welcome break for the butt from the back of the van. 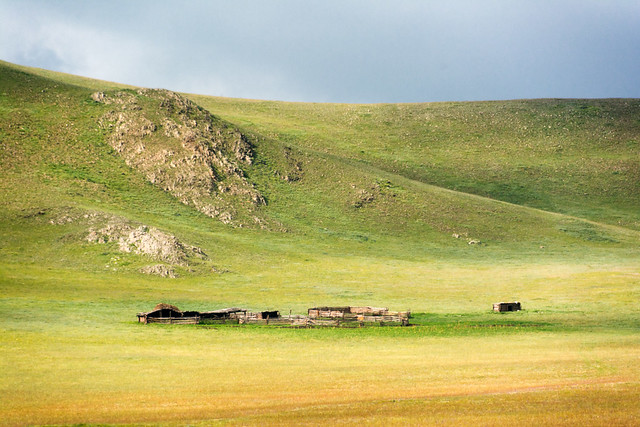 Slowly the weather clears, the landscape switches to forested rocky mountains and a watery sun struggles to make it through. After passing through some impressive country we branch off the relative bliss of the sealed road and hit something resembling moguls after a busy weekend. There are low slung hatchbacks and battered 90’s station wagons attempting this in convoy. Holes big enough to swallow cars do exactly that, bemused drivers get out and look even more bemused at their stranded vehicles. As we head up over a steep rutted pass there are cars defying all design limits bouncing in both up and down the slope, sometimes even in the direction intended. 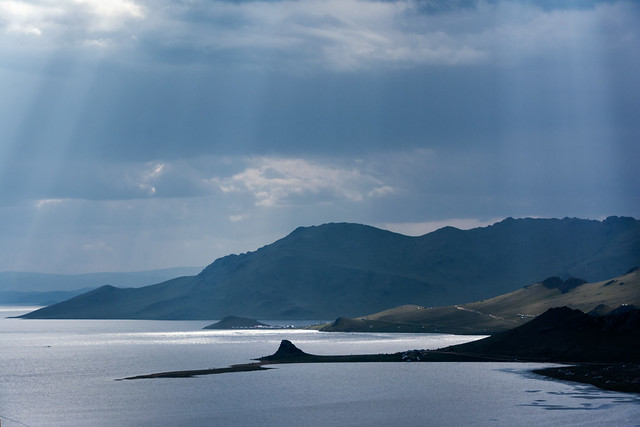 At the top of the pass, the splendour of Terkhiin Tsagaan Nuur (Great White Lake) unfolds. Less white but shining steel grey silver as I arrive, the sun piercing through heavy rainclouds to light up patches of verdant slopes around the edges.

From our camp, I climb a small nearby peak and watch the shifting light highlight one then another aspect of this wide vista. The lake seems to disappear beyond a vast winding coastline into the grey hazy distance in one direction, distant sunlit mountains spread along the horizon in the other. The landscape seems to shift every few minutes. 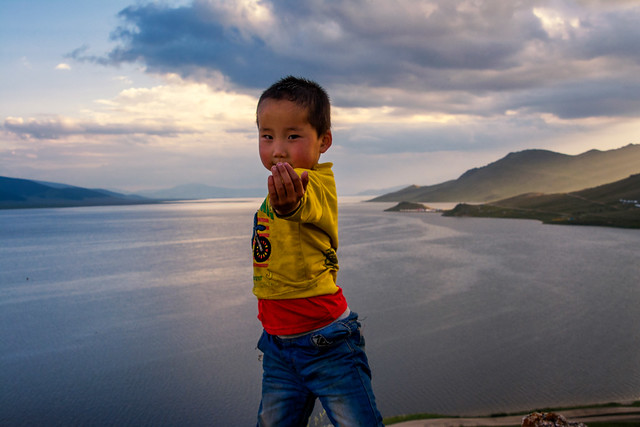 Some local kids scale the near vertical wall of rock (rather than the easy grassy slope) and proceed to entertain me with renditions of favourite songs, acrobatics and various impressions of favourite monsters and animals. Eventually a holler from below sends them running, tumbling and laughing hysterically back down the slope to some distant yurt. A good end to the day.